Music has a place in the heart of Morecambe and no-one knows this more than Pete Moser, founder and director of More Music, who is moving on after 25 years in the role.

When Pete started More Music in the 1990s, he felt that confidence in Morecambe’s artistic offering was low after the heydays of previous decades. More Music was created to put Morecambe back on the map, to give the community a feeling of pride in its achievements, and, ambitiously, to change lives. Twenty-five years on, it has achieved much of these aims, working with local, national and international musicians and artists and launching careers from the small stage to glittering success.

And whilst the focus has been on the West End – the Hothouse itself becoming a welcoming hub for the local community – More Music’s influence has been felt much further afield as its projects have worked with children, young people and adults across the region and its festivals have entertained visitors from far and wide. Today it is home to a number of groups offering musical and artistic opportunities for those with learning difficulties, those who feel lonely or marginalised, those who want to be musicians and leaders of the future, and those who just want to have fun!

Pete has met lots of challenges over the years, particularly the constant battle to maintain funding streams in a competitive environment. But he feels that change has been positive, particularly recently with other creative organisations establishing bases in Morecambe and festivals such as Vintage by the Sea, Morecambe Carnival and A Splendid Day Out offering interesting acts and drawing impressive crowds.

Price Of My Pig, who performed at More Music

His highlights over the years have been those which have really established Morecambe as a destination with a story to tell. From ‘Big Bay View’, created through the Song For Morecambe project, to ‘Flights of Passage’, charting the songs of the birds of the bay, and from his traditional ‘One-Man Band Shebang’ through to the ‘Long Walk’ project which has led to him visiting China 18 times, Pete has been inspired by the environment around him and its place in the world. And over the years, whilst he is convinced that Morecambe has something special to offer, he has come to discover that we are not so different from those the world over who live and work, struggle and create.

With a talented and dedicated team – now numbering over 20 – Pete is confident that the organisation will go forward with a strong creative vision and clear aims to build upon its national and international links. For his part, Pete looks forward to concentrating on his own creative pursuits – writing, practising and performing – so it is certain we will see more of his talents in future!

More Music now welcomes Loz Kaye as its new Artistic Director, who will be sure to build upon Pete’s legacy, taking the organisation forward with confidence.

Inspired? Why not take a look at what’s coming up at More Music including the wonderful Catch The Wind Kite Festival, or browse the Morecambe Bay website to find out more about the events and festivals taking place around the bay over the next few months. 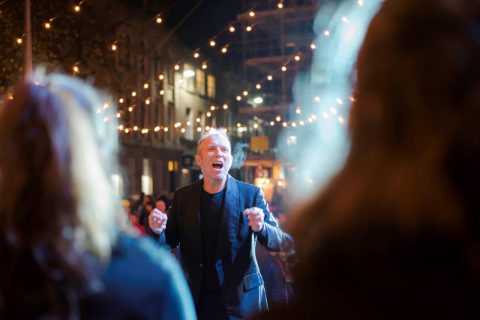