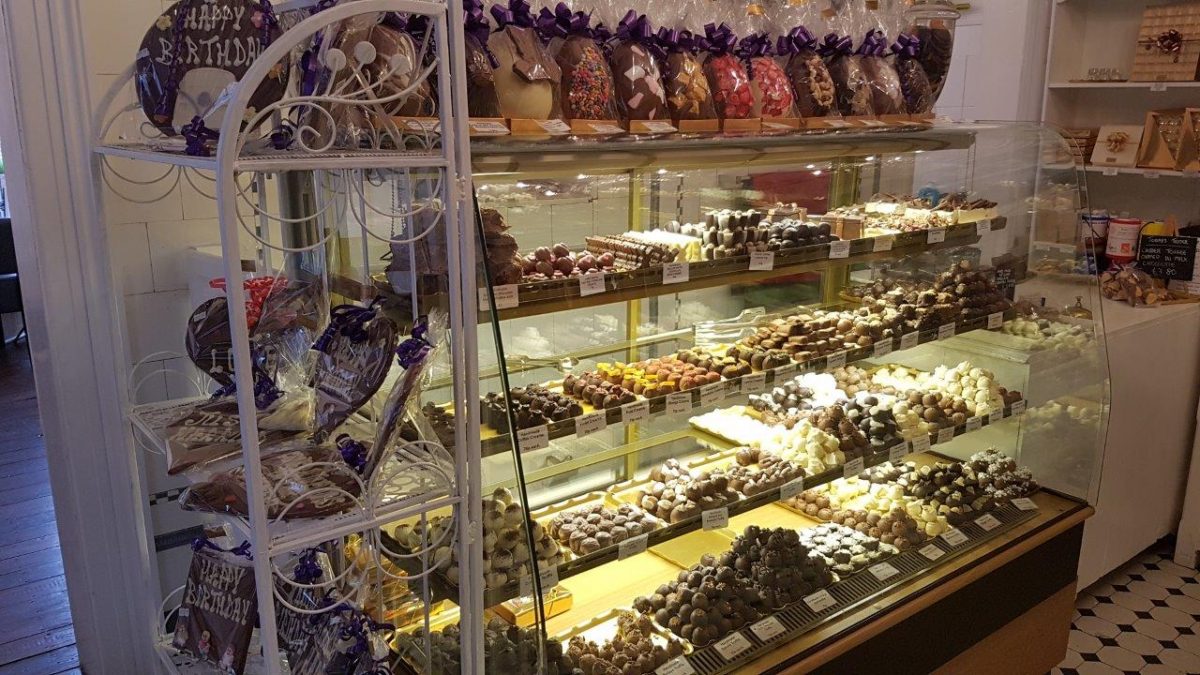 Chocolate is inescapable this time of year, wherever you look there are eggs, bunnies, ducks and all manner of other creations. Most of the chocolate delights on our shelves come from the big producers but did you know that Morecambe Bay is home to some excellent local chocolate producers?

Located in the heart of the village, Anthony Bennett has been creating chocolates here since May 2017. A fully trained chef, he’s previously worked at high end hotels in the region and has always been one for inventing things in the kitchen. His parents used to own a hotel nearby and he began creating handmade chocolates to go with their afternoon teas and they proved so popular that it wasn’t long before he was out selling his chocolates at local markets.

When he spotted the shop for sale in the village he knew it would be the perfect place to create and sell his very visual and hugely inventive range of chocolates. He gets his inspiration from travels to Paris and New York and produces flavours such as Rosemary & Smoked Butter Caramel, Sticky Toffee Pudding and Tequila Sunrise. As well as chocolates Anthony makes a range of delicious made to order cakes and prepares all the food for his café as well.

Choco-Lori is owned and run by Louise Rigby, which is where the unusual shop name comes from – Lo(uise) Ri(gby) – and their spectacular window displays often have groups of people pressing their noses to the glass. This tiny shop, in an old butchers, is crammed to the rafters with every kind of chocolate delight imaginable and every single bit of it is made on the premises by Louise and her mum, working away in the basement – even the fillings are all made on site.

It is a proper local family business with Louise’s brother working behind the counter but the sheer range and volume of delights on offer make it appear like a much bigger business. The shop has been there for six years and two years ago they added a small café on the side where you can pause for tea and a snack while enjoying the divine aromas floating up from the basement. In addition to their year round favourites they also produce a superb range of hand crafted Easter Eggs and their fresh strawberries dipped in Belgian chocolate are what summers were made for. If you can’t get to the shop in person, don’t panic – you can order online from their website.

Based in Greenlands Farm Village near Borwick, Madam Chocolat is perfect for those who want to get messy and have a go at chocolate making themselves. Kath is an ex pastry chef and she studied at Lancaster and Morecambe College before working at a number of hotels in the Lake District. Her friends often asked her to give baking lessons to their kids so she decided to make a business out of it.

She now runs a range of courses, usually for children, where they taste chocolate and learn about its history and production, before getting stuck in to making lollipops and moulded chocolates which are then lovingly wrapped in cellophane and bows for taking home. She also runs truffle making workshops for adults, including hen parties and corporate team development events. Although she occasionally hosts open days you generally need to contact her via her website and book ahead.

Walling’s Farm is well known locally for their huge and mightily tasty ice-creams which draw people from right across the county, but they also produce their own hand made chocolates too. Catharine Walling began making chocolates 15 years ago as a way of addressing the lull in their ice cream trade over the winter months. The chocolates are made by a team of three people working part time and they take their inspiration from all over the place, playing around and bouncing ideas off each other to see what works and what doesn’t.

As you’d expect with a farm, it’s not enough to simply produce a chocolate cow or pig, at Walling’s you will find breed specific farm animals, all of which are low on artificial colours and additives. As well as being able to order online, they also supply a number of other shops in the region and also produce a range of vegan truffles for a specialist outlet in Manchester.

…And a relative newcomer to Morecambe is the Northern Chocolate Co. on Morecambe Promenade. When a chocolatier meets an artist – magic happens! So come and try these delicious goodies…using specially-chosen ingredients, they taste as good as they look!