My Museum Passion – the memory of Morecambe’s suffragettes

My Museum Passion – the memory of Morecambe’s suffragettes

Rachael Bowers is Lancaster City Museum’s manager and here she shares with us her #MuseumPassion, the memory of two women who were passionate about the cause of women’s voting rights.

In their later years, these two sisters lived together at 48 South Road, Morecambe, but their life prior to that was anything but peaceful.

This medal and brooch belonged to two sisters, Hilda (1876 – 1955) and Lillian (1872 – 1962) Burkitt.
Before they retired to live in Morecambe, Hilda had been a confectionary maker and Lillian had been an actor, nurse and photographer. Both women played an important part in the struggle for women’s voting rights.

Hilda joined the Women’s Social and Political Union (WSPU) in 1907, coordinating the Birmingham group’s publicity and fundraising. She was arrested 4 times in 1909, the last time for throwing a stone at the train carrying Prime Minister Herbert Asquith to a political meeting in Birmingham. In prison, the suffragettes were treated as common rather than political criminals. In protest at this, and to draw further attention to their cause, they went on hunger strike. Fearful that the women might die during their imprisonment, the authorities went to great extremes to force feed them. This was a violent and dangerous procedure. Physically restrained by prison wardens, the struggling women would have a rubber tube forced through their mouth or nostrils, pouring liquid food into their stomach. This was a risky procedure known to damage their vocal cords, nose and throat. Occasionally the tube was misfed into the women’s lungs, causing pleurisy. Hilda Burkitt was the first suffragette to undergo force feeding. The WSPU awarded a medal to the women who had ensured force feeding. Extra bars were added each time its wearer was force fed. This medal carries 4 bars dated with her prison sentences. Hilda was force fed 292 times, more than any other suffragette. It is difficult to think about how painful that must have been, and the damage inflicted to her body.

Lillian was arrested just once, in 1908. She was part of a group of women who tried to force their way into parliament and present their demand for female suffrage. When arrested, Lillian used her stage name, Ida Cunard. She made this brooch from the two pennies she was paid for doing chores while in Holloway prison. Lillian continued supporting the WSPU but did not commit any more militant acts. She trained as a nurse, serving in Gallipolli during the First World War.

I am passionate about these two objects because I cannot imagine what these two women endured to get the democratic rights that I now take for granted. 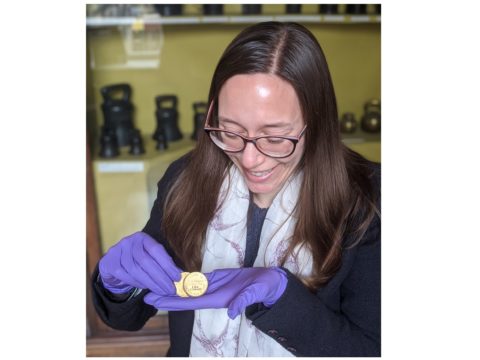